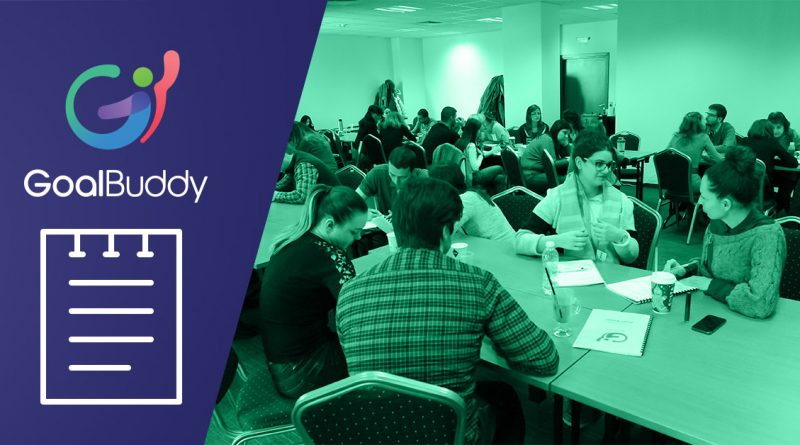 In this series of articles, we want to show how the clarity – control – habits model can be applied to every vision. If you are ever to move from “I want to be financially independent” to concrete actions and results, you’re in the right place. Here we will demonstrate how to ensure that the money you make is actively working for you instead of against you. And we’ll do that as always with some examples from our own experience.

We already saw the manner in which “GoalBuddy” addresses the issue at the first stage – clarity. It’s done with one or two 90-day goals that can pinpoint exactly where you are at this point and where you need to go in the future.

So, by now you’ve chosen well your destination. You’ve drawn some valuable conclusions and realized important things about yourself. You know where, when and how much you waste, i.e. what the “black holes” of your spending are. You also are fully aware of your bad habits in that respect. You might be already doing what Niki did – setting a 90-day goal of educating yourself by reading, researching and taking courses as well as talking to experts in the field.

Your next task is to find a way to use this information to create a streamlined and effective money management system.

It’s time now for the second stage – taking control. This is done with action. We already widely discussed how the 90-day action goals make the endeavor a straightforward one. Some are meant for experimenting and others for building up the right habits.

His first objective was to experiment with his monthly budget. For many people, it’s a good idea to plan ahead how much will be spent based on the collected past data. Except that he quickly found it wasn’t working for him. In fact, this was true for both of us.

It turned out it was a type of chore. It’s a monotonous and repetitive thing that neither of us found satisfactory in any way. Niki, for instance, likes to be meticulous and thorough but there are two components that he appreciates most in anything he does. These are fun and challenges and these were absent in his case.

Unlike when running a business, being on a budget is much more unpredictable, especially when you have little kids. There are often situations and emergency costs that would wreak havoc on anyone’s plans.

After all, it’s a matter of personal choice. For Niki, the task was more than difficult and at the end of the quarter, he knew it wasn’t for him. Instead, he looked elsewhere in his next 90-day goal.

Meet Mr. Eker and his jars

For most of you, the image of a glass jar brings memories of freshly baked cookies. Well, hopefully, this will change today.

However today we will look at these as containers of assets, something like bank accounts. This idea was introduced by T. Harv Eker[1]. So, Niki decided to give it a try. He didn’t know at the time that this would become his preferred choice of how to achieve his vision.

The idea in a nutshell

The principle is surprisingly simple – all of your monthly earnings go into six separate accounts. On a specific day you put in each of them a specific amount. Let’s say, your disposable income is $1,000 for a given month. In the first 5 jars, you put 10%, or a hundred bucks, while the last one gets 50% or 500 bucks.

Why is this way better than the usual budgeting?

The benefits of “filling up” the 6 jars

According to Niki, there are 3 main reasons.

Well, it could be a bit difficult at first.

The challenge for Niki

In practice, the initial setup was the only thing that didn’t go as smoothly. It turned out that back then the banks in Bulgaria didn’t offer such a service. So, he had to run manually the distribution using his bank’s online app.

How he did it

The rest comes down to first creating an excel file and then setting the corresponding percentage per jar. Then you make the transactions once a month and that’s all.

# 1 Financial jar, aka the liberty one

As Robert Kiyosaki[2] rightfully claimed, we have to pay ourselves first. That’s exactly the point of this first one, called “Financial Freedom Account”. For Niki it’s roughly 10% before he incurs any other expenses.

He wanted to use it for the accumulation of funds that can be used for investment at some later point. That’s how you can make your earnings bring in some extra income.

This jar is the most consequential for our future since it’s the key to financial independence.

“Savings for spending” are for the foreseeable big purchases and payments. This could be a new house or renovation, a second car, expensive vacations, etc. When put together their planning and management become much easier.

This is for training and professional growth. If you see that there is too much in it, then perhaps you are not investing enough in yourself.

When Niki sees that’s the case he usually enrolls in a class or pays for an interesting seminar. Buying books is another alternative. It’s usually not easy to spare $50 or $100 for a quality edition, or is it? In fact, it is but only when you have specially set aside the money for this purpose.

This “fun and leisure” account may be a bit too much for those who, like Uncle Scrooge, are obsessed with saving without having the tiniest clue what they are doing it for except for its own sake.

However, it will be good for them to get a little bit more balanced lives. And it won’t matter if it is an unforgettable experience or just some other type of pleasurable activity. Niki, for example, prefers to take his wife to some fine restaurants. The intent here is simply to be reminded that it’s good to relax and have some fun from time to time.

A lot of people practice this but they do it almost instinctively and outside of a money management system.

Nicky always assigns 10% to this one. It’s all about generosity. Undoubtedly it is important to make money but it is equally essential to be able to give it away for a good cause. When you already have the resources dedicated to this it becomes much easier to do regular charity work.

It could be as big as 50% of your monthly income. It is supposed to pay the bills for everything from food, childcare, health insurance, etc.

What Niki loves most about Mr. Eker’s method is that it channels your earnings into the most significant areas of your life.

Sometimes the amount in a given jar might turn out to be far less than needed.  It happened to Niki when he undertook a major renovation of the apartment. So, he and his wife decided to draw from the contents of the “Play and fun” one. Instead of skiing in the Alps or surfing on their favorite island, they had another less exotic and thus much cheaper vacation.

That’s why this flexible model makes running our finances an easy and straightforward process.

We’ve already gone through what’s the first step – namely, to clarify your vision and to look for an area of improvement. This could be anything like doing some courses, researching and discussing it with experts in the field. For any of these, you can set a 90-day goal and thus improve your understanding of the matter.

Things get different at the second stage, i.e. the control one. What you do here is start experimenting through different 90-day periods until you figure out what would work best for you. Niki succeeded on his second attempt. At first, he didn’t do very well but then he took on this new notion and for the last several years he never looked back. You should give it a try too. Or you can try any other approach to your liking. It’s key to remember that after some trial and error, you will enjoy in the long run the benefits of a simple but productive system. Our next topic will be how to turn this into a habit that does not take much of your time and energy.

[1] Thomas Harv Eker is an author, businessman and motivational speaker known for his theories on wealth and motivation. We refer here to the JARS money management method.

[2] Robert Toru Kiyosaki is an American businessman and author.

How to know that your goals are authentic
How to set goals: choose the approach that fits you best
A career vision – how to discover your true mission
How to stop practicing self-sabotage

One thought on “How to take control of our finances. Financial goals – part II.”