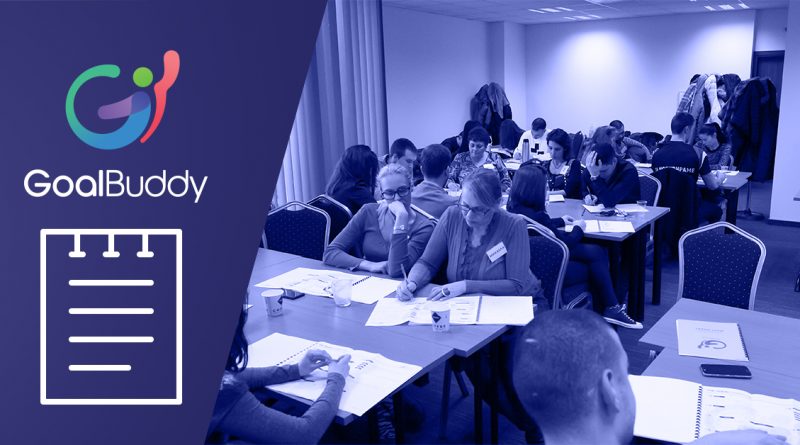 Have you ever had a game domino?

Well, you can play with it in another way.

In this article, we will show you how this applies to goal setting. And you might never look at things the same way again.

The big power of the many little things

In 2009, an interesting event took place in Holland. On Domino’s Day, the world record was broken when four and a half of them were toppled.

The experiment uses the potential energy of the individual domino. The more they are, the more power is produced. One goes down starting a chain reaction with a progression of increasing output.

Something else is at play here.

In 1983, Lorne Whitehead published in “American Journal of Physics” an amazing discovery – a very small domino piece not just bringing down the next one, but one that is much bigger.

In the year 2001, this was experimentally demonstrated in San Francisco – a domino can bring down the next one which is 50% bigger. Thus, if the first piece is 2 in, the eighth one will be almost 3 feet.

Just imagine! This geometric progression means that the 23rd one will be as tall as the Eiffel tower.

This is also true in life. When one thing, but the right one, starts moving it can make things much bigger than itself to follow suit.

What does that tell us

Often goals might behave just like domino tiles and thus store in themselves the potential for major consequences. If you manage to set them in the right way and then “topple” the first, it will, in turn, do the rest of the work. You do not have to push every single one of them.

The trick, of course, is to find out this very first one.

Not all goals are created equal

Some are special. We call these “activation goals”.

They can start releasing an enormous amount of energy through the many other goals that follow in their wake. By energy we mean the work needed to reach the many of your later objectives. Some will become quite easy while others will simply get resolved all by themselves.

Let’s see how this fits into our system.

The domino effect and “GoalBuddy”

It can be done with either the small weekly step or the 90-day goal.

A central concept in our system is that you can reach an objective efficiently rather than with too much effort or a waste of it. That’s why we have the rule to try setting a minimum number of objectives.

If you think that three 90-day goals and the corresponding three steps are way too few then think again. When these are of the “domino” quality then they will have an outcome going beyond their immediate scope.

And no one can dispute that this is a big plus.

Advantage # 1: You don’t have to worry about everything

There is no need to formulate dozens of tasks or to make long lists trying to figure out everything in advance. Choose the most important one, and the rest will follow naturally.

For example, at some stage in the development of “GoalBuddy”, we had to expand our team. We needed someone to help us with the written material.

It was only one thing to do: “To place an ad in a specific Facebook group.” That was followed by a series of events. We were contacted by different people who submitted suggestions regarding the text contents of our system. The selection process went on with a second round of the selection process until we finally selected the one person to join our cause.

So, you can see now for yourself:

It isn’t necessary to include in your weekly list things like “reply to the email”. You need to keep your eyes on the ball because there are plenty of distractions while your own resources are limited.

Advantage # 2: It simplifies your life

It’s easier to build your plans that way. Even the biggest project will go with ease and fewer issues.

Instead of clogging your brain with hundreds of thoughts, or drawing GANTT charts till you drop dead, you need only 2 or 3 activation steps bringing in the desired result.

But don’t go overboard with it!

Be careful with the activation steps

Formulating an objective is just the beginning and you are responsible to put the plan in motion.

There is another of our most favorite examples – a weekly step “to call the contractor”. Looks like nothing complicated, right? But, let’s see what happened to Niki.

And he called him. First, they talked on the phone and then they met. After hours of discussing all kind of options, the two guys decided what’s next… which was that Niki had to go and buy material. So, the 2-minute call to a contractor grew into a “domino” one toppling the next tile, and the next which resulted in lots of extra work for Niki. Well, there was always the possibility this could even “topple” the whole renovation project.

Advantage # 3: You are not getting the life sucked out of you

Now is the perfect time to state again the rule of the Buddy regarding the number of weekly steps – no more than 3 of them at the same time. Don’t get fooled by the fact that some might look not much of a commitment in terms of required time and effort. And all of your time could easily be filled with too many things to take care of and at the end, your schedule will crumble under the weight of its own “domino” tasks.

Let’s not forget that the intent here is that the whole process should to be easy and enjoyable, just like a game.

Human nature evolved in such a way that we generate more energy than we can possibly consume. Almost like the domino pieces, we have something of an inherent power waiting to be released.

This is not always the case

While our focus never stops to be on these “domino” steps even we sometimes fail to spot them.

An example of Niki’s recent “debacle” was very simple – “to check out in April the prices of a ski trip to Sella Ronda in the Alps”. The idea was that if the prices were good enough, to get on with organizing it with a group of friends.

But it all ended when he opened the website and realized that the ski season ends in March. The plan simply didn’t work out – some things in life don’t contribute much to your progress. They are could be valuable lessons though.

What matters, in the end, is that with time we get better. The following are a couple of (and out of our own experience) pieces of advice.

Rules for determining the domino step (and the “domino” goal)

These are our top 3:

That’s the secret. Always try to figure out which is the most important thing that has the capability to unleash a storm of activity in the right direction.

Your Buddy can help you by asking you the right questions. These are about where and how to start.

According to The Theory of Constraints, there is always the risk of “local optimum”. For example, a given operation from a production process may be a bottle-neck in terms of efficiency. But no matter how much effort and other resources are dedicated to its optimization (new machines, staff training, etc.), the improvement won’t affect the overall performance of the business. In other words, it was a wasteful endeavor in the first place.

If you can imagine your life as a production process then the same applies. You don’t just aim at improving everything in your life but you focus on those areas that will allow you to realize your dreams. There must your goals lie.

And let’s see now how this phenomenon is played out in the 90-day goals.

An avalanche in the coming years

Sometimes the domino effect can propagate throughout a series of objectives over several years.

Here is another of our examples. We wanted to develop a mobile app as part of our vision to provide people with various resources assisting them in getting better at achieving their dreams.

It all started with a 90-day goal – to find UX designers. And this determined a series of other targets for the next year and a half – meetings, contracts, development, tests, release, etc. And it continues to this day with development and introduction of new functionalities.

Sometimes you would be greatly surprised by an objective which turns out to be of that type.

That’s what happened to Niki in 2014 when he took a finance course. He wasn’t very interested in the subject but he did it anyway as part of his vision of financial independence. And then, to his own surprise, it all took on a life of its own. For the next year or so he tried out quite a few apps for analysis and management, then decided on and implemented a plan to pay off his loans as well as his credit card debt. And next was an investment strategy and creation of an emergency fund.

And there was also some icing on the cake!

This turned out to have a domino effect too!

A habit is a natural way to do things without much effort on your part. Build a routine like Ivan to practice 3 times a week with a personal trainer and then you’ll see what happens next.

Or, what Niki did – he has come up with his own positive morning ritual, including yoga practice, meditation, and visualizations of his visions. If you feel like you can give it a try yourself. It will exert an incredible effect on you and your attitude to life, the world and everybody else around you.

Pretty much anything you can turn into your second nature – healthy eating, regular exercise, good sleep and rest, meditation – will be a de facto realizing your vision of health in the long run.

Therefore all good habits have the “domino” effect.

When you manage to look at the greater picture you will realize that a dream fulfilled isn’t that hard thing to do. Almost anything is possible when you have a guiding vision with its well-chosen 90-day goals and weekly steps.

And now we have a question for you. What could be the first thing you would like to “topple”? Share it in the comments section and we together can have a good discussion about it.

Thank you very much!