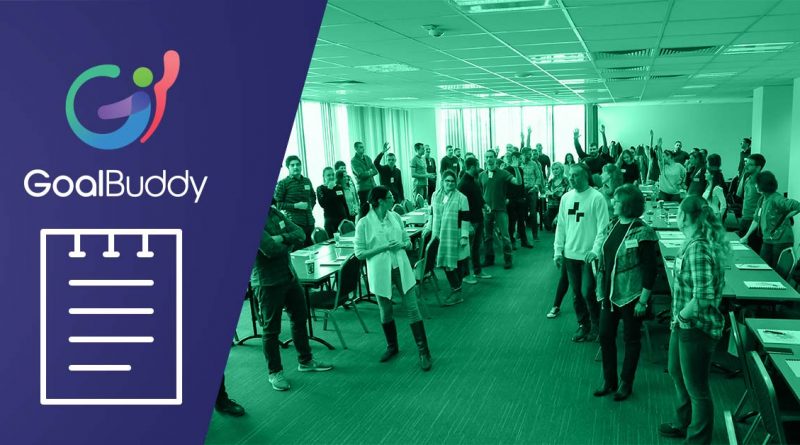 After using “GoalBuddy” for almost 8 years we were somewhat surprised to find out what made it so attractive to the user. It turned out it was, along with its social element, the simplicity of the system. These two were what helped people succeed in their objectives. Today we would like to share this “insight” of ours with you.

The seminar that changed everything

This last summer, we had another edition of our workshops. The attendees were a group of people who were particularly excited about fulfilling their higher aspirations. The energy was palpable in the conference hall which was still quite full an hour after the event was over. Everyone wanted to share, discuss and express their gratitude.

But this time around we ran the whole thing differently. We made the lecture shorter and focused more on the exercises and Q&A. At the end of the day, everyone had written an action plan for their dreams. There was something else – people found this new approach very helpful in a way we weren’t aware of till then.

The biggest challenge is the confusion that surrounds the topic of goal-setting.

It is best illustrated by what one of the participants said: “I can easily handle the chaos at home or work, but only now I am finally starting to get a good handle on the chaos of my goals.”

This is a perfect example of an important phenomenon. We unknowingly employ different approaches to organize separate aspects of our lives. But we don’t have anything of the sort for our higher aspirations. And that’s exactly what happened that day- we were instrumental in getting clarity in that respect. We gave guidance on exactly how to tackle the issue. It was also a surprisingly easy task.

The complex solutions are highly overrated

In practice, what people liked most was the simplicity. Let’s look at some rules of thumb to follow.

Our workshop audience was a bit skeptical how it could be so easy and true at the same time.

On a couple of occasions during the workshop, someone would interrupt us expressing their disbelief. “And that’s it? Is it that simple?” Yes, it is and that’s exactly the power of our system. No one needs 42 types of goals, a 104-row Gantt chart, or a page-long list of tasks. Keeping it uncomplicated is the key to it all.

Back to the basics

“GoalBuddy” incorporates a variety of principles, concepts, and exercises that could help anyone move effortlessly towards their objectives. Let’s focus now on the most basic ones.

And these are fewer visions and their corresponding 90-day goals, a 30-year time horizon as well as weekly steps. Let’s look at some guidelines on the most significant ones.

The first thing to do is to understand what you want in the long run.

You can start by drawing up your vision. But make sure it isn’t a grand one with many underlying objectives. Instead, have a separate one for each aspect of ​​your life. For example, these could be health, family, finance, career, spiritual and personal development.

You must include the specific things you want in each of these. At first, a draft would suffice. Just lay out the idea in general terms on a piece of paper.

Here are some quick points:

We have a series of exercises to figure out what you truly want. You can download them for free from here.

After you made the list it’s time for the next step which is an in-depth analysis and the related choices.

It’s preferable if you take on no more than 7 visions. But even then you have to choose the three most important. It may not be that easy but if you’ve heard the story of how Warren Buffett is choosing his priorities, you would already know what we mean.

And why do you think it’s three of them? Because you are just about to start working on them in your very first quarter. And it starts today. That’s right, it’s time to set specific goals.

The second most appreciated feature is that we advance going through separate stages. This is done through the 90-day action goals. There is a catch though. For each vision, you can choose only one intermediate objective for the quarter.

So, you are faced again with a choice. You already have the three visions, and now you have to decide how to choose the one goal for each of them.

You can use the following as tips:

In support of this last point, we have some numbers to point at.

It has been proven that if you take on more than 7 goals, then it’s likely you won’t achieve any of them. When these are 4 or 5, the chance of success is more or less decent. And if you have 3 or less, you should be able to complete them all.

This might seem somewhat counter-intuitive, but it all comes down to simply better focus. That was the most important thing for those in our last workshop. Several of them have spoken about how the idea of ​​focusing on what matters most has motivated them. They were convinced that this was the breakthrough for them.

Let’s move on to the third of our favorite simple rules in our system.

Sometimes we can get too excited about an idea and start chasing it right away. This could easily be something that’s just the latest fad and won’t matter much in a couple of years. In that case, it turns out we’ve wasted our time on something that has nothing to do with our long-term objectives.

The so-called 30-year filter comes to save the day here. It is about ​​evaluating everything – opportunities, projects, even relationships – according to whether there is any future potential.

You don’t want anything transient and not part of your core values.

It is amazing how much trouble you can spare yourself. It is also more practical to focus on skills and habits that will be there with you for a much longer time.

This is especially true in the fast-changing world we live in now. Today’s knowledge and skills might become completely obsolete in just a few years, while some others will last you for life.

Let’s suppose for example, that you want to promote your new business but you don’t know where to start. You can set an objective for the next 90 days to learn about social networking algorithms. Or you may decide to learn more about sales psychology. And while the former might change within just a few months, the latter has been staying pretty much the same for a while.

There is no universal solution

Be aware though that nothing will give you a definite “Yes” or “No” answer. Still, it can result in more clarity and that’s more than good for your decision process. We can’t understate how crucial the way you define your goals is. If they are of the action type their utility doesn’t have to be of long-term importance. Vision, on the other hand, is always strategical and thus there is no place for distractions and short-lived tactical actions.

In this case, learning the intricacies of Facebook may not pass the test. But it could be a useful endeavor if you view it as acquiring technology skills that could serve you well in the future.

Ivan uses it to go through any opportunities or project proposals. The first thing he asks himself, “Am I to be running this project for the next 30 years?” If not, then it’s not worth it.

Only the long term projects bring in lasting results.

Still, we need to point out something here. The answer is not always so clear cut.

It is quite normal when you want to start exploring a new thing, you are not completely sure if it is for you. It doesn’t make sense to make a lasting commitment to something you just started exploring. You can get a taste of it instead and see how it goes.

Experimenting as a goal

This is one of the best advantages of 90-day goals. You can use them to experiment and find out if it’s worth investing efforts in a particular area. Niki, for example, did work for several months on a prospective project before he realized that, although financially successful, it wasn’t what he wanted.

These experiments are needed so that you can learn from them. For 90-day goals, this happens naturally and painlessly when the “filter” is not a conclusive enough criterion.

Finally, here is the last of our simple principles.

# 4 Work on the weekly steps

Once we have our main visions outlined, including the three initial ones, then it’s time to act.

We assign one weekly step per quarterly goal. This is how the process unfolds – week after week, step by step we are getting closer to our dream. And with the time you will be surprised how far you can get.

Weekly steps are the part that gives people the most trouble. The following are the vital points.

If everybody at the workshop was successful to kick off their first goal-setting system then anyone can do it. Even better – it’s easy: only 3 visions, 3 goals (one for each vision) for the quarter plus 3 weekly steps (one for each goal). If you get stuck apply the 30-year “filter” for help.

The greatest advantage of “GoalBuddy” is its clarity and simplicity which guarantee things will happen. That’s why our new friends from the workshop fell in love with the system. It’s been already 3 months since this beautiful summer day. So, we will soon find out how they did. If you were among them, share in the comment section below!